Celebrations are underway after the Engadine Crusaders Senior Women E1 team took the title for 2014 with a draw with Menai Hawks.

It was a case of ‘anything you can do, we can do better’ with the SWE1s exacting a revenge of sorts over the team that beat them earlier in this year’s finals in a 3-3 draw at Heathcote Oval, giving the title to the Minor Premiers.

The title didn’t come easy, only awarded to our Crusaders team after 110 minutes of football and a nail biting finish after the girls were tied at 2-2 at the end of regular time. 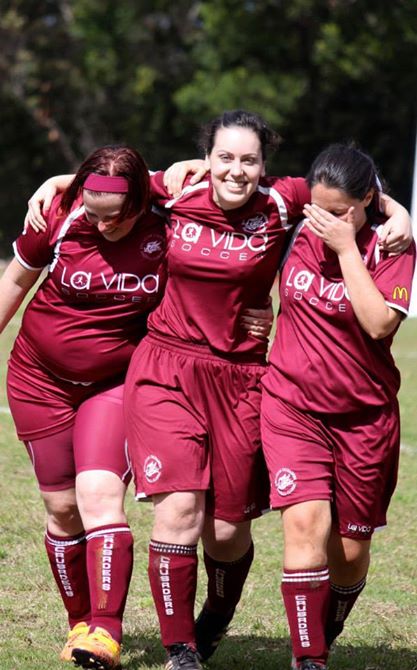 It was a controversial way to finish 90 minutes with a penalty awarded to Menai just before full time  for a handball, with a successful strike from the spot tying up the game again and sending the game into extra time.

It was edge of your seat stuff with another goal coming for the Crusaders early into extra time, putting our girls in front and the title within reach. But this action-packed game wasn’t finished yet and before long one of Menai’s attacking players launched a rain-maker from about 30 metres out and it sailed over the head of our goalkeeper, who had done so well to keep them to two goals all game.

Coach Adam Seckold says the girls stood up and fought for the victory.

“I’m very proud of them. They fought very hard and played 110 mins non-stop and that’s impressive. Menai beat us in the semis so it was always going to be tough. Menai is the only team that has scared us all year. They definitely had the ability to beat us. They played very skilfully and tore us to pieces at times but I think we wanted it more.

“The girls worked hard for it all year and played very well all season. We ended up winning the minor premiership by 7 points. I don’t think it would have been fair had we not won the title today and I’m so happy for them.

“They’re all good friends. They’ve played for a long time, some of them, and they suit each other and back each other. They’re a great team. There are some very good players in our team, but most importantly they all back one another and that’s what got them there this year.
It’s a great effort from the team that were in F grade last year and got pushed up to E grade and have now gone on to win the title.  Congratulations to the girls from everyone at the club. Its a well deserved title and we’ll look forward to celebrating with you at the senior presentation night in a couple of weeks.